The Jubilee, 20th Anniversary Festival of Information Achievements – INFOFEST 2018 was held in the Budva Hotel “Avala Resort & Villas”, from September 30 to October 6. Also this year, the organizers of the Festival were the Ministry of Public Administration of Montenegro and the consultant company Biznis Link. The jubilee INFOFESTA slogan was “History of the Future” as an association on the role of the Festival in the development of information and communication technologies in our regions. The slogan was explained in more detail by INFOFESTA director in the catalog’s editorial:

“At first glance, this year’s Infofest slogan, or the title of this introduction, will come to you. Explained, the future is a term that signifies what is to happen, and history refers to what has already happened. So, with full logical right, we can say that the construction of “The History of the Future” is an unsustainable semantic paradox.

Where, then, is this irrelevance of an otherwise festive organizer of the Festival?

Progress, and even survival in the ambience of contemporary technological development, is increasingly dependent on the openness of our mind. “Open mind necessity,” I would say in English. The open mind is constantly questioning even undeniable axioms, and perhaps theoretically confirmed theories. Stereotypics to and not to mention. Only through chronic re-examination of “proven” and “confirmed” we can spread space for creation, invention, for new developmental penetration. If there was no such openness, it would be difficult for us today to have such mobile telephony, broadband network, Internet …

In the previous Infofest for 25 years, many unmistakable stereotypes have been written, and “born” is what we did not expect. This quarter of a century confirmed that we were justified in all doubts, that we did not care, that we understood why it was important to strive for the future to be considered and, as far as possible, foreseeable. That’s why we were at Infofest, the first (at least in our region) talking about new computer architectures, the future of the Internet, email, broadband structures, the Cloud, the Internet-of Things concept, the … Time is confirmed that, in this way, at least a little has been written about the history of the future! With this interpretation of my own right, we need to understand the context in which we will talk about artificial intelligence, self-study this year … And, perhaps, ultimately futuristic, we must now ask – where will we talk about future teleporting to the future Infofest!

Looking at the future can not rest on the thrill of every new “invention” and its trivial application. We must not subvert our intellectual capacity just by anticipating the new announcements of large vendors. Great Aleksej Kišjuhas says, “Sometimes you should walk around the graveyard of once-live and glamorous technologies. If we have a fax, a bumper, a wax, a CD player … Because, just as it has disappeared or been extinguished over 90 percent of the living species that have ever lived on Earth, it is the same with technology. Trips are “living dinosaurs” like crocodiles. ”

Sounds immoral, but – to ask, do you think that we are at Infofest, all these years, trying to recognize just the “crocodiles”, to understand them and to pay attention to them. I do not know how much that quest was successful but we did not give up. And that is good, it is encouraging! What do you think?

Why, then, this jubilee Infofest would not be the “History of the Future”? If anyone thinks we have not written so far, let her go now. Jubilee is a real opportunity for it!

That is why I invite you to be together with the writers of the history of the future. ”

INFOFEST 2018 began with the opening ceremony of the Avale hotel terrace. Along with an appropriate artistic program, Montenegrin Public Administration Minister Suzana Pribilovic and High Official of the International Telecommunication Union Kemal Huseinovic addressed attendees. The Jubilee Festival was opened by the Vice-President of the Assembly of Montenegro Branimir Gvozdenović, one of the founders of the INFOFEST idea.

The Jubilee Festival congratulated all participants on Montenegrin President Milo Djukanovic, a personal letter read at the opening ceremony.

In addition to these, 34 companies and institutions had the status of official festival participant:

In the ex-catedra program, which lasted five business days, 34 company and project presentations were realized. A total of five panels and one workshop were held. The special INFOFESTA program was the traditional (16th) International Conference of Regulatory Parties in the Electronic Communications Sector, Carriers of the Electronic Communications and Postal Services Agency and the International Telecommunication Union. The Post Office of Montenegro has organized the Eighth Regional Counseling “Digital Territory of Mail”, and the Montenegrin Olympic Committee is the fourth advisory on “Informatics in Contemporary Sport”.

At the INFOFEST exhibition, there were 14 companies in their checkpoints.

The Oracle Chamber of Commerce of Montenegro

In the framework of the Regional Scientific and Professional Conference INFOFEST Pulse 2018 “, in the two sessions were presented the 11 best works, selected by public competition. The works were published in the INFOFESTA Catalog and nominated for festival awards and acknowledgments. These are:

At the final festival session, at the suggestion of the Program Board that followed all the festival programs, the Board of Directors of INFOFESTA awarded the following prizes and acknowledgments:

To contribute to the development and synergic integration of the ICT sector in Montenegro, recognition is given to the Montenegrin Chamber of Commerce.
The group of authors: Dr. Miroslav Majstorović, Dr. Dušan Krstajić and Dr. Radovan Cvetković are awarded the recognition of the quality of work “Application of Concepts AO and UPP in the development of life insurance offer”, presented within the framework of the Regional Scientific and Professional Conference “Infofest Pulse 2018”.
In particular, the Board of Directors of the 25th Festival of Computerized Achievements – Infofest 2018 thanks Mr. Dejan Cvetkovic, CTO for Digital Transformation in Microsoft, as a lecturer at the invitation to the jubilee 25th Infofest.
The Infostream Company is given special recognition of the quality of the “License and Licenses Registries” solution from the domain of business process digitization.
Special recognition is given to Saga – New Frontier Group for the solution “Geolocation Services: G-fence”.
For dynamic and successful application of the latest technologies in different domains, the award is awarded to E-Smart Systems.
Due to the high functional usability of the results of the 8th Regional Advisory “Digital Postal Territory”, a great recognition is given to the Battle of Montenegro.
For a successful transformation of the portfolio of its own solutions on the principle of “Software as a Service” is awarded a special recognition to the company
For the extraordinary professional contribution of the 16th International Conference “Regulatory Activities in the Electronic Communications Sector: Development of the Digital Framework for the Digital Future”, a great recognition is given to the Agency for Electronic Communications and Postal Activities.
The award for the best authoring work presented in the framework of the Regional Scientific and Professional Conference “Infofest Pulse 2018” was given by Leonid Zimonja, Miloš Ljubojević and Srećko Stanković, for the work “KNX Protocol Implementation in Intelligent Installations”.
For the best functional solution presented at Infofest 2018, awards are awarded to the “Media and Consumer Surveys System”, a new product of Montenegrin Telecom and Ipsos.
For the best company appearance at Infofest 2018, a great reward for “All about IT engineering” is awarded.

You can see photos from jubilee Infofesta HERE. 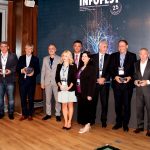